One day in Nakhon Ratchasima
Part I

After the nearly 4 hour drive from Nakhon Ratchasima Province back to the capital of this country, I was determined to perpetuate memories of my first time ever entering two places no one wishes to go; namely a prison and a court.

There I was in awe of the high concrete used to be white walls in sight on the left-hand side while the car rolling towards the entrance of Klong Phai Central Prison. Never had I imagined I’d finally get to witness what hides behind those walls. Also, not to forget our mission which was to hand over 50kg of dates donated by the Alkwarthar Foundation (thank you!) to what seems to be over 150 Muslim inmates spending their days and nights inside the highly secured compound. However, solely 10 of this number were reportedly given the allowance to greet our arrival.

When done with declaring our intention at the info desk, we were guided to the “education room” filled with bookshelves and a handful of books. The room was decorated simply with beautifully hand painted shelves but what actually caught my attention was the books of other languages than Thai and English- those books were written in Finnish and Danish! The first thing that popped up in my head was the question, “who are these books for?”. Never did that question receive any reply or it was asked out loud. 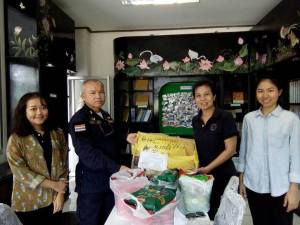 Minutes went by in that room and we were waiting patiently, and holding good hopes that we would be let into the world behind bars. Unfortunately, the rejection came along because of security reasons (as per usual) but our mission was partly accomplished. They happily accepted the dates. Subsequently we asked to personally give the prison director a couple of publications (1 of them was the revised Minnesota Protocol globally launched last Thursday) that we’d brought with us from Bangkok. The answer was not a candid “no”, so we decided to fill our empty stomachs with food prepared in the kitchen next to the prison walls whilst waiting for the director to finish his meeting.

When I was done with drying my tears from eating the spiciest som tam I’d ever tasted, we went back to meet with the prison director. Again, we were kept waiting for another roughly 15 minutes. In his fairly big office, there were green curtains with small golden tassels hanging half way to the floor, wooden shelves taking up a whole wall and each rack was decorated with sacred statues and a round also wooden conference table suitably for at least 10 people only a few steps from the doors. A 20 minute conversation felt like two hours. We talked (the prison director and the CrCF director), exchanged ideas and shared opinions on things like another introduction of a painting project for the detainees, Ramadan and how healthy the dates are. We thanked the prison director for his friendly reception and left the room. 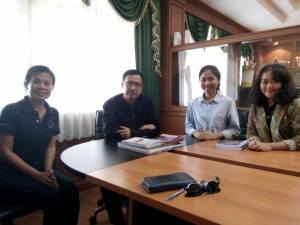 As much as we wished to return home with a pile of pictures capturing us together with the inmates who were anticipating to have at least 10 minutes of their hours with us, we were still grateful for the officials’ assistance in accepting the donated items. Even though they are unable to celebrate this religious holiday with their loved ones, the significance of their knowing that they are not forgotten ought to be evoked.