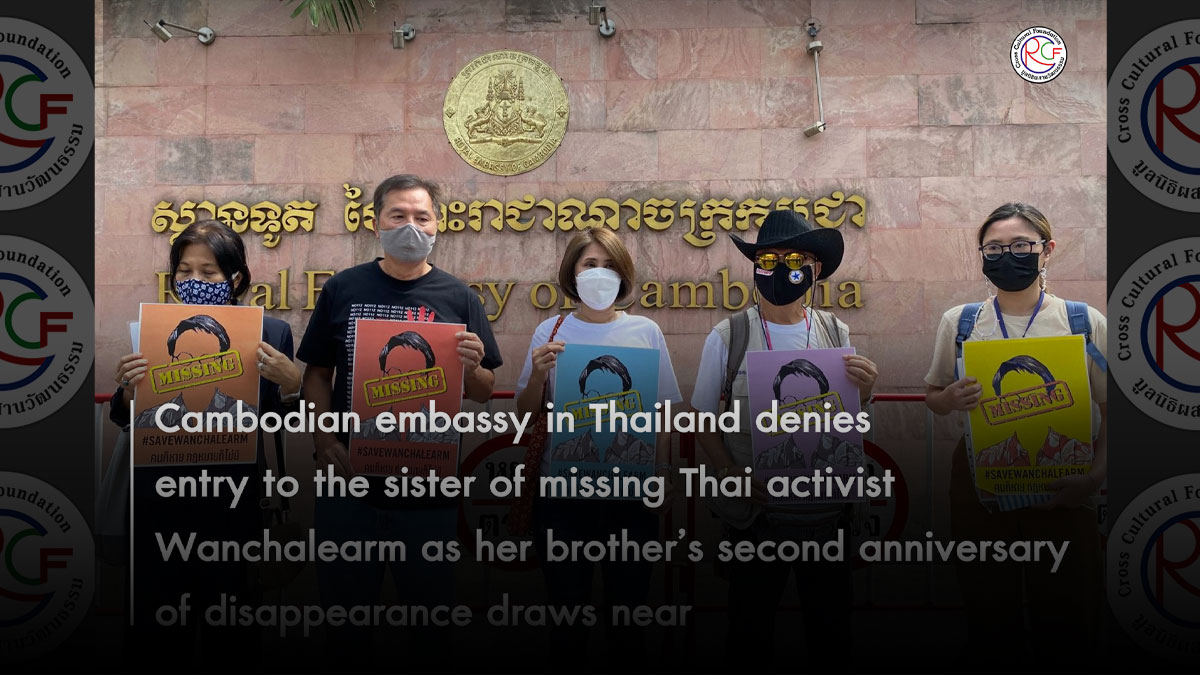 Today (June 2, 2022) the sister of missing Thai activist Wanchalearm Satsaksit and lawyers from the Cross Cultural Foundation and Thai lawyers for Human rights went to submit a petition letter calling for the Cambodian government and the Phnom Penh Municipal Court to disclose information on the investigation of her brother’s case.

Sitanun Satsaksit, Wanchalearm’s older sister has requested for an appointment with the Cambodian embassy via fax on May 31, 2022. But the embassy today did not send any representative to receive the letter and denied her entry.

Instead, around 10 police officers were deployed in front of the embassy to inform Ms Sitanun to contact the embassy via the Ministry of Foreign Affairs.

“It’ll be two years since my brother went missing on June 4th.

I’ve gone to every agency from the Attorney General’s Office to the DSI to the Ministry of Foreign Affairs, I have not received any updates from anyone about my brother’s case. This is such Thailand’s classic double standard, authorities work as fast as lightening for some but move at a snail’s pace for others.

But I’m determined to come back every year to the embassy to demand justice for my brother,” Sitanun Satsaksit.

Wanchalearm was kidnapped on June 4, 2020 in Phnom Penh, where he was in self-exile to avoid a politically motivated criminal charge laid by the Thai junta.

He was bundled into a van in broad daylight and has not been seen since despite the unrelenting efforts of his loved ones.
Efforts by authorities to locate him in Thailand and Cambodia have ground to a halt, dogged by delays in evidence gathering and obfuscation over responsibility for carrying out a probe.

Instead of driving forward the search for her younger brother – a Thai national – Thai police have chosen to pursue a legal case against Sitanun, a heartbroken relative for calling for justice in public at demonstrations last year.

CrCF and Amnesty International organize a few activities this week: “Tar’s friends reunion (นินทากันสักนิด มิตรวันเฉลิม)” an event at Suan Kru Angoon from 16.00 – 21.00. And a panel discussion “Thailand, land of surveillance: from enforced disappearances to digital and biometric surveillance” at the FCCT from 19.00-21.00.