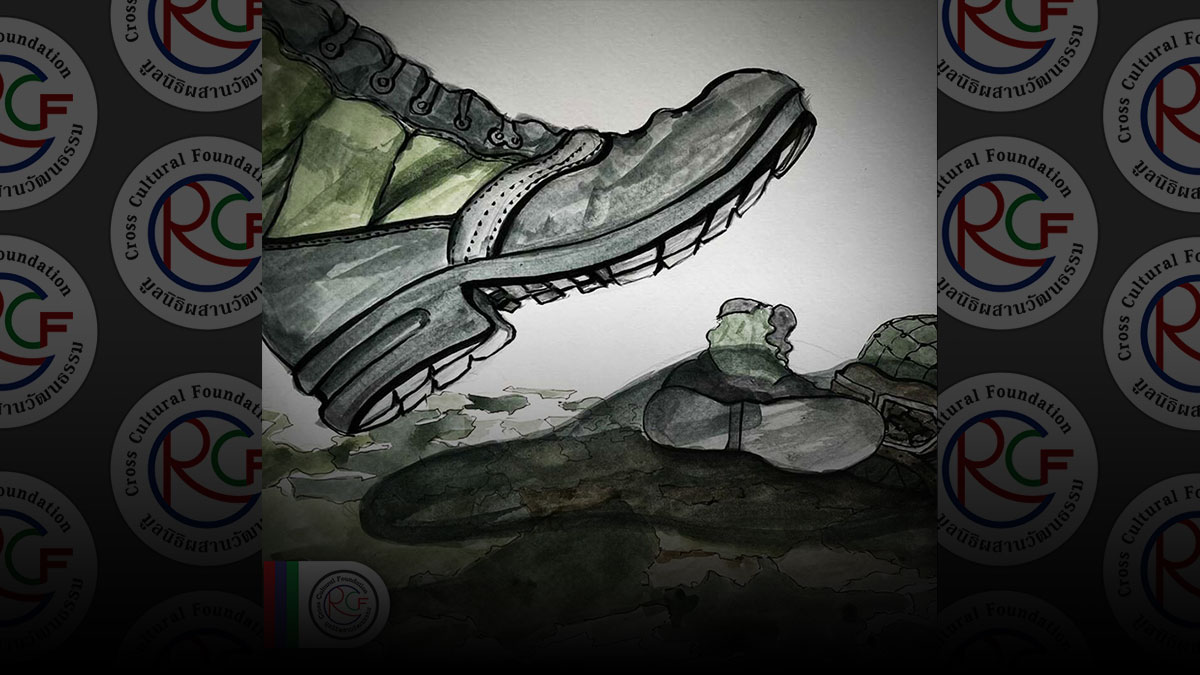 On May 1, 2019, Papichaya Eidnun received a phone call from the military. Her son Private Prajak Kaewkongtham, an active-duty soldier, was in a bad mental state, the officer told her.

When she arrived at the Air Force base she found private Prajak trapped in a cell, exhausted, lying in his own urine and feces. His condition was so bad he could not even remember his parents. His whole body was covered in wounds, bruises – his head so badly wounded it deformed.

It took around five to six months of recovery for him to recall the story and tell his mother. Here is what happened according to Prajak and his mother’s testimony.

The story: The beginning

In 2017, Prajak, 22-year-old private who was a physically and mentally fit young man decided to enlist and was stationed at the Royal Thai Air Force Battalion, 56th Airborne Division, in Hat Yai District, Songkhla.

After receiving three months of training under new military regulations, the Air Force allowed every new soldier to return home for 10 days.

However Prajak did not go back after his leave complaining the drills were too hard for him. In fact he was gone for a total of 288 days, January 2018 to October 2018.

Prajak returned to the Air Force on October 27, 2018. Around a week after going back, he was sent to a military prison for punishment. Prajak was forced to run around a field until he dropped. He was forced to roll in the mud naked for several times until he injured himself crushing his hips against hard rocks.

He told the guard about the injury. But the guard ignored him and continued to force him back into the pond for several hours.

He was eventually given a break and asked “what did I do wrong?”
But Prajak says he never received an answer.

About a week later, around 6 pm while he was taking a shower, a guard and a few other prisoners came into the bathroom and attacked him. He was dragged into a cell where they had him stand against the cell bars and tied his hands and feet. The guards and prisoners stomped on him with combat boots, he was beaten like that for about an hour until he was badly injured and taken back to his prison cell.

The next morning around 5 am, two new guards and the same prisoners from the day before dragged him to the same place he was attacked. This time, his hands and feet were not tied, but the prisoners held him against the bars and held his hands and legs back. Then the two guards started to beat him again. Only this time it did not take as long as he was already brutally injured. Once finished, they dragged him back to the prisoners’ quarters and gave him some unknown pills.

“My son returned to his Air Force training with hands and feet in their normal shape but when he got out, they weren’t the same.” – Papichaya, Prajak’s mother.

Heartbroken Papichaya, Prajak’s mother, said she had convinced him to go back to the base for fear of consequences. However, she was baffled why her son was subjected to this severity of treatment. All she could do at that time was take care of her son, hoping he would recover and return to his normal life.

Papichaya felt it was hopeless to seek justice for her son. But at the very least, she wanted to be compensated for what happened to him.

The brutal punishment by his superior officers has left him with four types of disability. He could no longer have a normal career. There has been no justice for him and his family nor any disciplinary action from the Air Force against his assailants. Prajak continues to receive hospital treatments to this day.

“There is an obvious violence involved in the military training. No power is given to the people in the justice system. It is an extreme violation to human rights.” – Preeda Nakpew, lawyer, Cross Cultural Foundation.

Thailand is a state party to the International Covenant on Civil and Political Rights (ICCPR) with an absolute prohibition on torture since 1997 and has been a state party to the Convention against Torture or Other Cruel, Inhuman Treatment, or Degrading Treatment since 2007. However, Thailand still lacks legal guarantees and guidelines for military punishments that far too often lead to injuries and in some cases – death. The lack of such legal measures has made it impossible to bring offenders to justice.

No serious measures have ever been taken to prevent torture and ill-treatment, whether be from training or punishment, in this context. There are no legal parameters to effectively deal with torture and ill-treatment by authorities in custody. Incidents like this are frequent, making it almost impossible to hold anyone to account especially when happening inside the barracks.

It is no doubt that torture and ill-treatment in custody is a structural problem that requires long-term measures and reforms. Unless the law on the Prevention and Suppression of Torture and Enforced Disappearance is passed, what happened to private Prajak will continue to happen to someone else’s sons and the offenders will continue to enjoy their impunity.