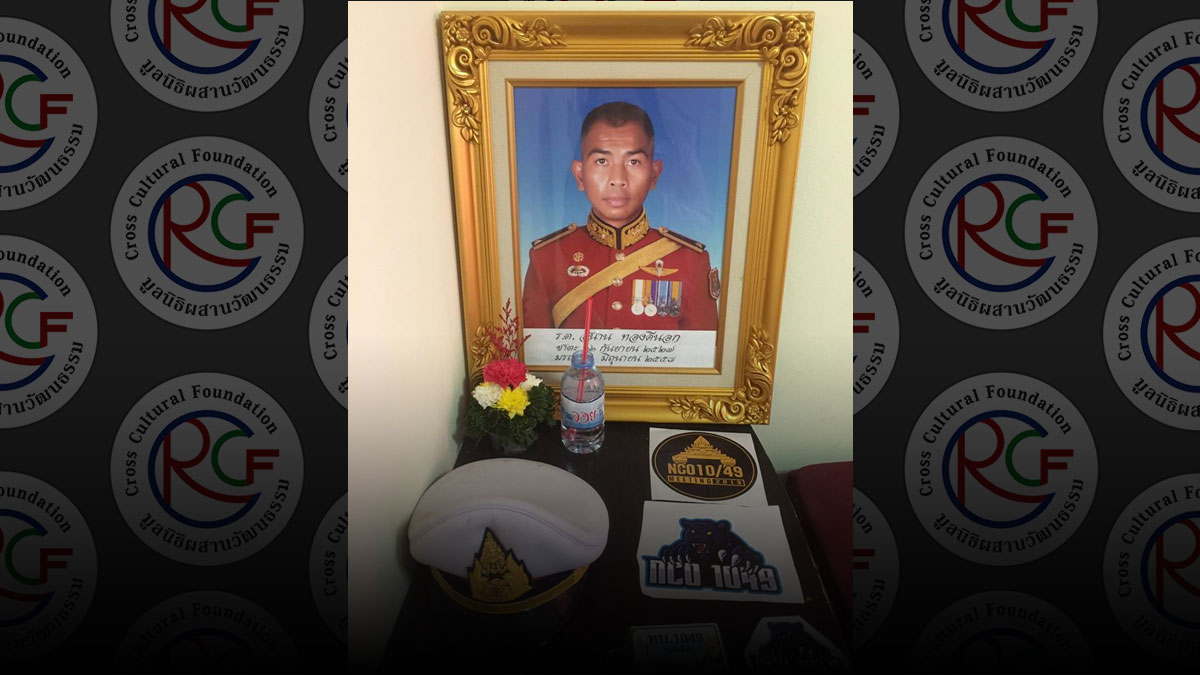 Appeals Court ordering the Royal Thai Army to provide compensation to the mother and wife of Sub Lt. Sanan Thongdeenok after finding that Sub Lt. Sanan’s death during a military drill stems from a reckless performance of duties by the trainer

In this case, Mrs. Wan Thongdeenok (mother), plaintiff no. 1 and Miss Thanyarat Wannasathit (wife), plaintiff no. 2 are filing charges against the Royal Thai Army with the Bangkok Civil Court. They demand compensation by invoking the Act on Liability for Wrongful Acts of Officials B.E. 2539 in the Black Case no.          P 2580 /2559. They seek compensation for the death of Sub Lt. Sanan Thongdeenok during a military drill as part of the Ultimate King’s own Bodyguard Team (UKBT), Year 11 on 6 June 2015. As part of the training curriculum, soldiers must participate in a swimming test under the training and supervision of Royal Thai Army officers. When the incidence happened, Sub Lt. Sanan was forced to swim back and forth in a swimming pool without any rest for more than ten rounds. Overcome by fatigue, he submerged under the water and drowned. The trainer and supervisor of the training failed to look after the safety and welfare of the participants and did not provide a prompt rescue.

On 14 March 2019, the Lower Court ruled in the Red Case no. P1223/2562 that the military Captain who was the head of the swimming ream, and who was affiliated with the Royal Thai Army, had carelessly committed a breach of his duties as swimming coach. His neglect led to the fatality of Sub Lt. Sanan. The Lower Court then ordered the Royal Thai Army to provide compensation to Sub Lt. Sanan’s mother and wife, including compensation for funeral expenses and expenses incurred from the deprivation of legal support. The appeal hearing lasted for nearly a year.

On 21 May 2020, the Civil Court read the verdict of the Appeals Court, which concurred with the Lower Court’s verdict. The Court found that as the head coach of the team, should there be any breaches of safety for the trainees, it was his responsibility to call off the training. He failed to do so. Meanwhile, as a subordinate official during the drill, it was incumbent on Sub Lt. Sanan to heed the instructions of his superior official who was the trainer. It was therefore natural that Sub Lt. Sanan would try his best to continue swimming until he was exhausted. It would be unjustified for the Head Coach to claim Sub Lt. Sanan continued to swim of his own free will, and thereby refused to stop the swimming. Upon seeing the deceased’s fatigued condition, and as he appeared to be unable to complete the number of swimming rounds designated, the trainer continued to push him to complete the rounds in a forceful manner. The trainer did not seek advice from the existing medical advisor and did not use discretion to call off the swimming drill. This resulted in the continuation of swimming and the fatal drowning of Sub Lt. Sanan. It is considered a tortious act against the deceased.

As the in-charge agency of the Head Coach, the Royal Thai Army is therefore held accountable to the Act on Liability for Wrongful Acts of Officials B.E. 2539’s Section 5/1. As for the compensation deserved by the defendants, the Appeals Court concurs with the ruling of the Lower Court to award the mother and wife compensation that will include funeral expenses and expenses incurred from the deprivation of legal support and service.

The case has drawn much attention from the public.

The case sets legal precedent for the Royal Thai Army to acknowledge its flaws and improve military drills to ensure safety standards for military trainees are met.  The Royal Thai Army should ensure that in the future military officials at all levels are protected from violent power structures, as demonstrated by what happened to Sub Lt. Sanan.

In this particular case, the Royal Thai Army should conduct an inquiry, an investigation and a disciplinary procedure to hold the military official accountable for his inaction. The findings of the inquiry should be revealed to the family of Sub Lt. Sanan Thongdeenok and the public. The Royal Thai Army has to ensure the family receives compensation payment pursuant to the Court’s ruling. Involved official must be held responsible for the expenses incurred from the commission in order to prevent the wasteful use of public money. “Measures to prevent future tragedies like this one should also be put in place” said Pornpen Khongkachonkiet, Director of the Cross-Cultural Foundation (CrCF).

For more information about his case, please see https://crcfthailand.org/?s=ร้อยตรีสนาน