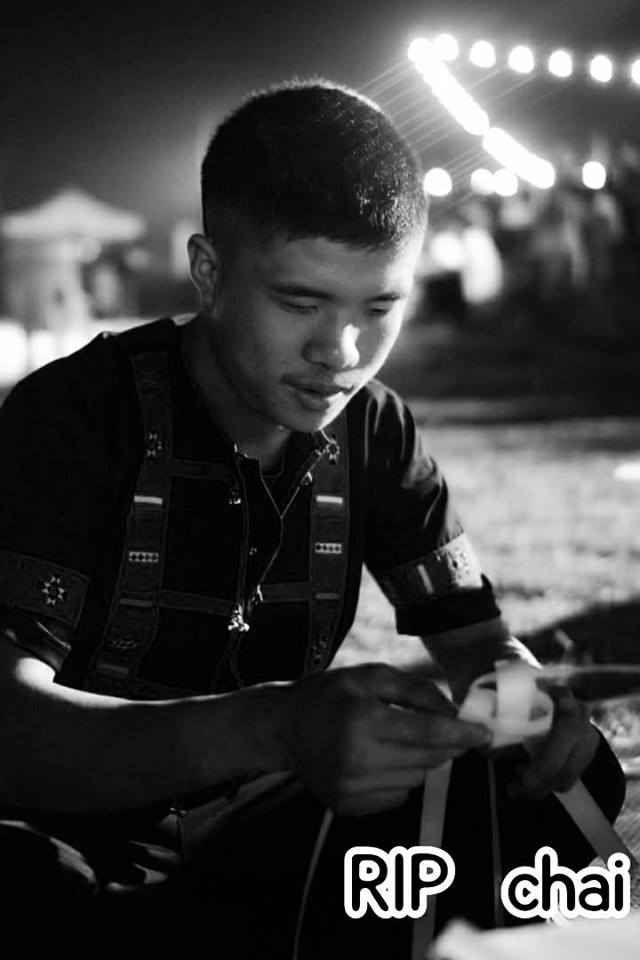 The perpetrator must be brought to justice:

The extrajudicial killing of a high school student and an ethnic Lahu youth activist,

Witness protection must be provided as investigation proceeds

On 17 March 2017, Mr. Chaiyaphum Pasae, a Grade 10 student living in Tambon Muang Ma, Chiang Dao District, Chiang Mai, was shot death by a military official who claimed the extrajudicial killing was justified during the search for drugs. The operation was carried out by officials under the charge of the 2nd Company of the 1st Operation Command, the Taskforce of the Fifth Cavalry Regiment, King’s Guard in collaboration with the Pha Muang Taskforce and took place around 10.00am at Rin Luang Check Point, Tambon Muang Ma, Chiang Dao District, Chiang Mai.

According to the account of the officials at the checkpoint, they asked to search the black Honda Jazz sedan with license plate noi. Khor Kor 3774  Chiang Mai. The car was driven from Ban Muang Na by Mr. Pongsanai Saengtala, 19 years with Mr. Chaiyaphum Pasae, 21 years (according to his ID card) as a passenger. They initially complied with the request to vacate their vehicle and there happened to be an argument between them and the military officials and the ensuing physical attack. Later Mr. Chaiyaphum was found dead by a gunshot wound closed to the military checkpoint. Meanwhile, Mr. Pongsanai was held in police custody and later in the prison on charges concerning having in possession illicit drugs.

The incidence has stirred doubts among the local villages and the community of activists since Mr. Chaiyaphum had been a youth activist working with the Offspring Ton Kla Youth Network. He was talented in music and short-filmmaking. Without Thai nationality, he was an advocate for the right to Thai nationality for himself and his community through nonviolent action. He was found amicable among the community of the ethnic peoples and civil society in general. He had taken part in social activism organizing youth camps, composing songs, performing music and making short-films. He had also participated in the “Children’s and Youth’s Voices in Society” project run by the Children and Youth Institute under the Children and Youth Development Foundation (CYF) helping to reflect issues faced by the ethnic children to society (for more information, please read “To know problems of a child one must ask a child and the “Children’s and Youth’s Voices in Society” project: A Solution of Thai youth in Thailand 4.0 Era”). Mr. Pongsanai was also an outstanding student and had been elected to as chairperson of the students in his school. Both were classmates.

The military agencies have come out to strongly defend the action by claiming that some drugs were found in the car subjected to the search. A knife for farming purpose and a bomb were also found. Also, the extrajudicial killing was justified as Mr. Chaiyaphum was running away and trying to fight back by hurling an unknown type of grenade toward the officials. The officials were left with no choice but to fire one gunshot causing him to die. The account seems to be inconsistent with the conditions found on the body of the deceased and according to the account by the local villagers.

While a mission to combat drug trafficking is an important task, it has to be carried out professionally and based on accurate tip-offs and intelligence. In addition, by allocating such important task to the officials who might not have much professionally trained in combating drug trafficking, it might have led to an excessive use of force and an infringement on the people. Without necessary checks and balances, it would certainly bring about gross human rights violation and an unlawful act. Meanwhile, the right to life has to be protected according to the law and no one should be executed arbitrarily.

The Cross Cultural Foundation (CrCF) is gravely concerned about the investigation of the case and has the following demands to make;