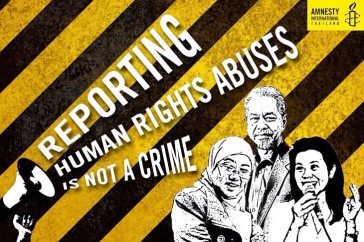 In reference to the case of Mr.Somchai Homlaor, an advisor and a former President of Cross Cultural Foundation, Ms. Pornpen Khongkachonkiet, the Director of Cross Cultural Foundation, and Ms. Anchana Heemmena, the leader of Duay Jai Group, of the case the Internal Security Operations Command Region 4 (ISOC 4) Forward has filing with the inquiry official at the Muang Pattani Police Station alleging that Mr. Somchai, Ms. Pornpen, and Ms. Anchana, the 3 HRDs to had committed a criminal defamation and a violation of the 2007 Computer Crimes Act as a result of their laughing of the report “Torture and other Cruel, Inhuman or Degrading Treatment in the Deep South Documented in 2014-2015” and uploading the report onto internet, such actions causing the damaged to reputation of the Internal Security Operations Command Region 4 (ISOC 4) Forward.

On 2 February 2017, Mr. Abdul Kohar Awaeputae, attorney, Muslim Attorney Center Foundation (MAC), a lawyer of the three human rights defenders, received a summon from the Col. Pol. Satit Kanchanapuwadon, Superintendent of Muang Pattani Police Station, rejecting the request by 3 HRDs for the inquiry police to questioning more witness, given the reason that the commander cannot grant the request. Therefore the 3 HRDs must present themselves to the inquiry officer on the 9 February 2017 at 10:00 AM.

However, on such date, all 3 HRDs already have another commitment. The lawyer of the 3 HRDs and the inquiry officer agreed that the 3 HRDs would surrender themselves to inquiry police on 21 February 2017 at 13:00 O’Clock, to submit the case to the public prosecution.