Can forest officials burn down people’s houses to evict them? According to the Administrative Court ruling last week, the answer is yes. 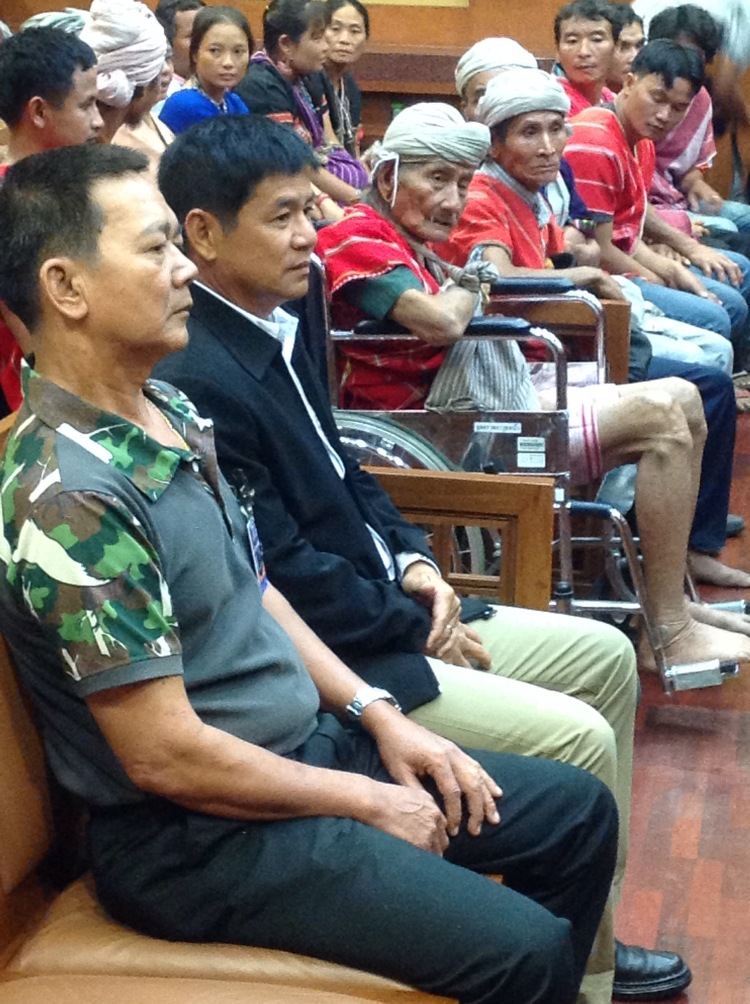 For some 10 million people in forests who are under the threat of eviction from the military regime’s “Reclaiming the Forest Operation”, the court ruling certainly sent shivers down their spines.According to the operation’s plan, the government will confiscate 500,000 rai of forest this and next year to reclaim 26 million rai of forest within 10 years.

“Forest eviction on this massive scale can only be done through force and violence,” said Prue Odachao, an ethnic Karen activist and community leader. “With the court’s green light to arson, I fear more violence on the ground.”
Sanitsuda Ekachai is former editorial pages editor, Bangkok Post.

The ruling in question involves a lawsuit filed by a group of indigenous Karen forest dwellers whose bamboo huts, rice barns, and personal belongings were burned down by Kaeng Krachan National Park officials in 2011 to forcibly move them to a resettlement village.

The forest dwellers took the case to the Administrative Court, arguing the arson was an overreach of their authority. The law requires a formal warning in writing and a court order before forest officials can dismantle buildings in protected forests. This did not happen. The Kaeng Krachan forest dwellers also insisted they have natural, moral and constitutional rights to stay in their ancestral lands.

The court rejected both claims.

According to the verdict, the area cleared by the Karen forest dwellers is in a dense jungle, so they cannot claim their rights over the forest area. Instead, they are forest encroachers. Consequently, forest officials can burn down the bamboo huts and rice barns to stop the forest dwellers from living there and clear more forest.

His simple words of hurt, related by his translator, were quickly and widely shared in social media, accompanied by an outpouring of outrage and disillusionment. A group of artists are taking their protests online by drawing the Karen elder’s portrait and sharing it online with a plan to exhibit the portraits at a Bangkok art gallery.

It is a known fact that the indigenous peoples in Kaeng Krachan have been living in isolation deep in the jungle called Jai Paendin (Heart of the Land) long before the forest was declared a national park, Angkhana Neelapaijit, a National Human Rights Commissioner wrote on her Facebook page.

“Grandpa Ko-ee is even older than the National Park Department itself. This incident is not only about destroying people’s homes and properties, it’s also about harming ethnic minorities’ rights and cultures,” she wrote.

Conflicts between forest authorities and forest people are old news. But this conflict is nothing ordinary. On one side is an iconic forest dweller, 105-year-old Ko-ee Mimee who commanded high reverence from his Karen people. His cause is the right of indigenous people to live on their ancestral land and preserve their simple way of life which includes rotation farming.

On the other side is a combative forest official, Chaiwat Limlikhit-aksorn, the former national park chief who led his team to set fire to the dwellings of the indigenous Kaeng Krachan forest people. Despite his many controversies including a murder charge and the mysterious disappearance of a Karen activist, Mr Chaiwat is now head of the “Almighty Tigers”, the military regime’s forest crackdown troupe.

Many see it as a contest between moral right and raw power. Forest officials are notorious for arresting people who have been living in the forests long before authorities demarcated the area as protected forests. But until Mr Chaiwat, no one had ever set fire to people’s homes. He even took a TV crew aboard his helicopter to publicise the arson as an act of bravado to protect the forest. Thanks to the footage, the public came to know about the violence.

The public also knew what unfolded. After the arson, a local politician and an advocate of Karen forest dwellers’ rights connected the forest dwellers with the Lawyers’ Council of Thailand. He also made allegations about Mr Chaiwat’s forest encroachment and a mansion built with illegal timber. He was shot dead while at the wheel of his car. Police charged Mr Chaiwat with murder. He was acquitted for lack of evidence.

That’s not all. Grandpa Ko-ee’s nephew, Porlachee Rakchongcharoen, or Billy, mysteriously disappeared after being arrested by Mr Chaiwat. Billy was in charge of preparing the forest dwellers’ testimonies and liaising with the lawyers to sue the park. Mr Chaiwat insisted he had already released Billy. But the Karen activist was not been seen since.

Mr Chaiwat alleged the Kaeng Krachan forest dwellers are national security threats because they are not Thais but sympathisers of the Karen rebels in Myanmar, using Thai forest to grow marijuana and engaging in drugs. He also claimed the bamboo huts were not the Karen’s houses but temporary shacks of no value.

Evidence shows they are all Thai nationals. When officials finally reached the Heart of the Land for a demographic survey in 1982, they found forest dwellers had long been living there, among them grandpa Ko-ee and many other forest dwellers. All had old coins issued by state authorities for hilltribe people, showing they are native to the land.

They also explained what authorities view as slash-and-burn is actually the Karen’s traditional farm rotation system. In a cyclical order, they will leave an old plot to regenerate for about seven to 10 years before returning to till the land again. This system allows the soil to replenish itself and allows the trees to grow back which keeps the forest green. When they return to clear the old plot, they are condemned for destroying the forest out of misunderstanding.

It is their cyclical farming system and their simple way of life, close to nature, that has kept Kaeng Krachan forest healthy. Under the National Park Act, however, forests belong to the state and they must be free of humans. Any human activities in protected forests — even removing a twig or a pebble from the forest — are considered a serious crime carrying a heavy jail term. The forest dwellers also cited the indigenous peoples’ rights enshrined by previous charters and International Convention on the Elimination of All Forms of Racial Discrimination ratified by Thailand.

The court ruled the international conventional is not legally binding, and the arson did not violate the constitution because it was done to protect the forest. It also found forest authorities did not have to formally inform the forest dwellers about the eviction because they did not have any legal rights over the land in the first place. “I was stunned and gripped with fear as I listened to verdict,” said Prue Odachao, who also attended the court session. “Forest officials often tell us hillpeoples in the North that we should be evicted because we no longer live a traditional, simple way of life like our ancestors.

“But here are the country’s most traditional Karen forest dwellers following the most traditional way of life close to nature. This is how our ancestors lived. If authorities still don’t allow Grandpa Ko-ee and the indigenous Karen to live in Kaeng Krachan National Park and can just violently remove them at will, what will happen to us?”

Forced resettlement is not the answer, he said. As a rule, authorities cannot find enough farm lands and new livelihoods for those who are evicted, plunging communities into poverty. The highlanders have been campaigning with the land reform movement to offer policy solutions to tackle land rights conflicts. Among them are community forests and community land ownership which were adopted by civilian governments but fiercely resisted by the forest bureaucracy. With the military at the helm to strengthen officialdom, the draconian forest policies are now back again — and with the controversial Mr Chaiwat as the forest eviction commander. “I’m losing heart and hope. I now fear for the worst,” said the Karen activist.