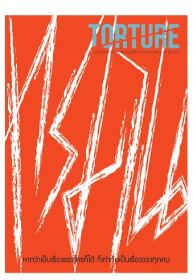 Songkla, May 18, 2016 marks an important date in the fight against torture in Thailand. The Supreme Administrative Court of Songkla read the official verdict ordering ISOC to pay 101,200 baht to Plaintiff no. 1 and 100,000 baht to Plaintiff no. 2 (with 7.5 % interest calculated from 2012) in damages for two victims who suffered torture/ill treatment in Yala Province. This will result in both Plaintiffs receiving approximately $5000 USD each. The verdict stems from an incident that took place over 7 years ago in 2009, when the injured parties were then 14 and 20 years old respectively. The case sets an important precedent, extending the right to claim for damages beyond the torture victims themselves to the family members who were also unduly affected as a result of the abuse.

Mr. Adil Samae, then 14 years old, and Mr. Mafoawsee Kwangboo, then 20 years old, were detained by a military patrol force on the 11th of April 2009. The arrest took place around Pattani River, Tambon Sateng, Yala district in the Yala province. During detention, the soldiers physically and verbally abused the young men.

A civil case was subsequently filed with Songkhla Administrative Court; demanding that the Defense Ministry, the Army, and Internal Security Operations Command (ISOC) compensate the men for the harm suffered by the soldiers in their line of duty.

Prior to the commencement of the civil case, one of the accused officers plead guilty and was indicted on criminal charges by the Pattani Military Court for the physical assault that he launched against the two men. In light of his guilty plea, what would have otherwise been a two-year sentence was reduced by more than half to a six-month imprisonment and a 2,000 baht fine. This sentence was later suspended due to the actions of the first offender.